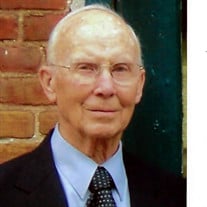 V. Nowell “Pappy” Hoover, 93, of Lititz, PA, died Tuesday, August 4, 2020 surrounded by family at his home in Lititz. Born in Orlando, FL, he was the son of the late Gerry A. and Ferne N. Goodling Hoover. He was the husband of Jacqueline Hinkle Hoover, with whom he would have celebrated 69 years of marriage on August 12th. Nowell was a J.P. McCaskey graduate and received his Bachelor of Science from Franklin & Marshall College in Economics/Accounting. He entered the U.S. Army Air Corps during WWII and served from 1945-1947. He worked at Lancaster Laundry as an owner/operator where he served as President and Treasurer prior to his retirement in 1990. Following his retirement, he and Jacqueline moved to the Villages in Florida for 29 years. He was a very active church member of Trinity UCC, East Petersburg and former member of First Reformed UCC and past secretary and treasurer and president of the congregation. He served as Director of Penn Central Conference. He became a member of the Lancaster Rotary Club in 1953 where he achieved 67years of perfect attendance and was a Paul Harris Fellow. He participated in the service club bowling league representing his Rotary club. From 1964-1971, he was the Head Coach of the soccer team at F&M and prior to that the Assistant Coach from 1957-1963. Later on, he was the past director for Meals on Wheels and also volunteered countless hours for over 20 years. In addition to his wife, he is survived by his children, daughter, Sandra L., wife of Douglas Hilton, Mount Joy, son, Douglas K., husband of Ann M. Hoover, Lititz, daughter, Beverly E. Brown, Lancaster and son, David A. Hoover, Lancaster, six grandchildren: Douglas and Eric Hilton, Jennifer Bechtel, Caitlin Hoover, Alison Stanley and Myah Brown, four great-grandchildren; Sarah Hilton, Kayla Bechtel and Jack and Hazel Stanley. He was preceded in death by a sister, Betty Jo Thynge and a brother, Gerry A. Hoover, Jr. A private Graveside Service will be held in Conestoga Memorial Park. A celebration for his life will be announced for a future date. In lieu of flowers, Memorials in Nowell’s name may be made to Trinity UCC, 2340 State Street, East Petersburg, PA 17520 or Rotary Club of Lancaster, P.O. Box 1387, Lancaster, PA 17604.

The family of V. Nowell "Pappy" Hoover created this Life Tributes page to make it easy to share your memories.

Send flowers to the Hoover family.