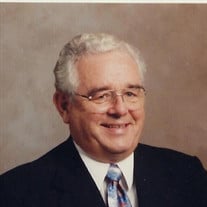 With great rejoicing, Rev. Walter Sanford Jackson, 91, entered heaven on June 21, 2021. He died at home in Greensburg, PA, where he had been living with family for the past 3 years. Rev. Jackson is survived by his wife of 8 years, Helen (Betsy) Shoppy Jackson, daughter Beth Weaver(Jay) of Lancaster, and sons David Jackson (Jeanne) of Lancaster, PA; Steve Jackson (Lynn) of Greensburg, PA; Philip Jackson (Lynn) of Skopje, Macedonia, and stepchildren Elizabeth Carroll (Brian) of Houston, TX, and Wallis Shoppy (Emily) of Atlanta, GA. He was richly blessed to have 20 grandchildren, 14 great-grandchildren and 5 step-grandchildren. Walter is also survived by his brother Paul Jackson and sisters Virginia Feenstra and Lois Spatola, as well as many nieces and nephews. He was preceded in death by his first wife, Marjorie Harrison Jackson, his parents, and two brothers, Arthur and Frank Jackson. Walter was born to Arthur and Adelaide Jackson of Upper Darby, PA, on February 5, 1930, the second of six children. He began an incredible life’s journey when, as a young child, he put his trust in Jesus Christ as his Lord and Savior, and when, as a teenager, he committed his life to missionary service. After completing Bible training, he and his wife Marjorie headed off with their young family to Suriname, South America, where they aided in church planting in the capital city of Paramaribo. There Walter learned of the Wayana tribe, located in the heart of the jungle, and became deeply burdened to bring them the truth of God’s word in their own language. Even at the end of his life, unable to express his thoughts in words, Walt clearly retained a passion for the Wayana people and a desire to be reunited with them someday. His greatest delight was knowing that he had been used of God to bring the message of salvation to these precious people. Walter and Marjorie’s work in missions and Christian education later took them to the Dominican Republic and then to Asheville, North Carolina. Upon moving to Lancaster, Walt served in many capacities: on the pastoral staff at Calvary Church, as chaplain at Calvary Homes, as an interim pastor at Rutgers Community Christian Church, even as a bus driver and painter. A man of varied professional skills, his greatest desire was to serve God faithfully and intentionally in everything he did. After Marjorie’s death, Walt met and married Betsy Shoppy who had been widowed some years earlier. Together they continued their ministry of hospitality and intercession on behalf of both believers and unbelievers around the world. As Walter’s mind and body began to decline, his love for prayer, singing, and reading scripture never waned: in fact, passages from hymns and scripture were some of his final clear words. As in 2 Timothy 4:7, he fought the good fight; he finished the race; he kept the faith. Walter’s Celebration of Life will be held Saturday, July 3rd at 11 AM at Calvary Church, 1051 Landis Valley Road, Lancaster, PA, and will also be live streamed at www.calvarychurch.org/pastorjackson . Friends may visit with the family at Groff Funeral Home, 528 W. Orange St, Lancaster, PA 17603 on Friday evening from 6-8 PM and at Calvary Church on Saturday morning starting at 9 AM. In lieu of flowers, memorial contributions may be made to America’s Keswick Christian Retreat & Conference Center, 601 Route 530, Whiting, NJ 08759.

With great rejoicing, Rev. Walter Sanford Jackson, 91, entered heaven on June 21, 2021. He died at home in Greensburg, PA, where he had been living with family for the past 3 years. Rev. Jackson is survived by his wife of 8 years, Helen (Betsy)... View Obituary & Service Information

The family of Walter S. Jackson created this Life Tributes page to make it easy to share your memories.

Send flowers to the Jackson family.