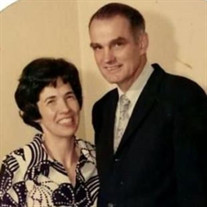 Wanda Hawkins Major, beloved mother, grandmother, and great-grandmother passed away on Monday, August 10, 2020 in Lancaster PA. Wanda was the cherished wife of the late John Burks Major. Valuing education, Wanda moved from helping her father in the fields of their Georgia farm to North Georgia College, Crawford W. Long Nursing School and obtained a BS in nursing from Indiana University of Pennsylvania in 1967, a Master’s in Education from Duquesne University in 1974, and later became a pediatric nurse practitioner. While she lived in different states and communities, Wanda consistently and compassionately worked as a nurse at a veteran’s hospital, in private duty, and later in the Pittsburgh public schools. Caring for others was a primary part of who she was. Born in Tennessee, Wanda was the daughter of Luther and Nellie Hawkins. She was one of six children, predeceased by her sisters, Gwen Thomas, Jackie Moore, Wilma Hill, and Betty Sue Hawkins. Wanda is survived by her brother, Donald Hawkins. Left to cherish precious memories of Wanda are daughter, Wanda Elaine Major and husband, Barry N. Douglas of York, PA and son, Andrew Burks Major and his wife, Gail (Forster) Major of Carolina Beach, NC. Wanda will also be greatly missed by her five grandchildren: Travis, Teague, Gina, John, Carly and husband Jason, and her great- grandson, T. J., all of whom affectionately referred to her as Ayah. When asked to describe her, Wanda’s “precious" son said that if Wanda got on a bus, everyone would leave that bus feeling better about themselves because of Wanda. She loved and was loved and will be deeply missed. Burial will be at Fort Indiantown Gap National Cemetery at a date yet to be determined. Donations may be made in Wanda's name to CC Mellor Memorial Library, 1 Pennwood Ave #2, Edgewood, PA 15218 in the community Wanda and John called home.

The family of Wanda Hawkins Major created this Life Tributes page to make it easy to share your memories.

Send flowers to the Major family.