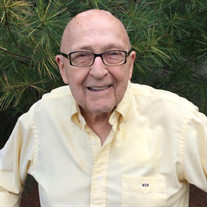 A true gentleman has departed from this world. Wayne D. Murphy, 86, died at Mennonite Home in Lancaster, PA on Wednesday, October 21, 2020. Born in Sumner, Iowa, he was the son of the late Veryl S. and Bernice Meighan Murphy. He was married to Judith A. Morris for fifty-two years, prior to her passing in 2006. Wayne received his bachelor’s degree in Labor Relations from Michigan State University and enjoyed a career in human resources serving as a Personnel Director with many corporations; including General Motors, TRW and the former ITT Grinnell Corporation of Columbia, PA. He proudly served in the US Army. He is survived by his son, David W. Murphy (Julie), Lititz, and his daughter, Linda A. Berger (Daniel), Lancaster, five grandchildren: Jennifer Y. Murphy, Patrick W. Murphy, Christopher K. Murphy, Daniel A. Berger, Jr. and Brian M. Berger, and one great-granddaughter, Evangeline P. Murphy as well as a sister, Eileen Siechert, Cedar Rapids, IA. He was preceded in death by a sister, Jean Kruger. Always endeavoring to serve mankind, Wayne had a long history of volunteering with many professional associations as well as causes that were an extension of his values and passions. He served as the president of the Blackhawk Musky Association, director of the Wisconsin Wildlife Federation, board member of the Lancaster Public Library as well as a mentor with SCORE, a role he enjoyed immensely. Wayne’s employment with General Motors afforded him the opportunity to live with his young family in Augsburg Germany. This was the start of a lifelong passion for world travel. Out of a deep love and reverence for the natural world, Wayne and his family enjoyed the wonders of our national parks by camping at scenic destinations with their travel trailer. Special memories were shared during family vacations in Chincoteague VA, where countless hours were spent fishing, exploring, and observing wildlife. In later years, Wayne and Judy enjoyed chartering sailboats in the Caribbean with dear friends as well as cruises to destinations such as Alaska and the Galapagos Islands. One of Wayne’s great pleasures and sustaining forces was his lifelong love of reading. In addition, he enjoyed boating, fishing, being a ham radio operator as well as collecting and restoring numerous Corvairs. Always tinkering, Wayne’s active mind continually strived to better whatever he encountered. As a beautiful link in the great chain of being, Wayne’s enduring legacy to his family and friends is the love, kindness, and wisdom that he leaves behind in this world. Services will be private at the convenience of the family. In appreciation of the staff at Mennonite Home, contributions in Wayne’s name may be made to Mennonite Home Communities Benevolent Care Fund or to the Lancaster Public Library.

A true gentleman has departed from this world. Wayne D. Murphy, 86, died at Mennonite Home in Lancaster, PA on Wednesday, October 21, 2020. Born in Sumner, Iowa, he was the son of the late Veryl S. and Bernice Meighan Murphy. He was married... View Obituary & Service Information

The family of Wayne D. Murphy created this Life Tributes page to make it easy to share your memories.

A true gentleman has departed from this world. Wayne D. Murphy,...

Send flowers to the Murphy family.