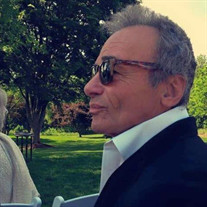 William Thomas McClure, Jr., 78, passed away on Friday, November 13, 2020 at Hospice & Community Care, Mount Joy facility. Tom was the son of William Thomas, Sr. and Louise Kauffman McClure. Born and raised in Oxford, PA, he graduated from Oxford Area High School in 1960. A veteran, he served in the United States Navy from 1961-1965. He lived in Michigan and worked at the Ford Motor Plant in the truck division. After moving back to Oxford, he was a custodian for 25 years in the Oxford School District. Music was his life and he played keyboard in the Tammany Hall Band for 20 years. Tom is survived by a son, William Thomas McClure, III a daughter, Candice Diane Ford (Larry), three granddaughters: Madalyn McClure, Cloe McClure, Cierra Miller, daughter-in-law, Jen McClure, a sister, Diane McClure Murry and many loving nieces and nephews. He was preceded in death by his longtime companion, Pat Elicier. A celebration of Tom’s life will be held at a later date. If so desired, memorial donations in Tom’s name may be made to Hospice & Community Care, 685 Good Drive, Lancaster, PA 17604-4125.

The family of William Thomas McClure, Jr. created this Life Tributes page to make it easy to share your memories.