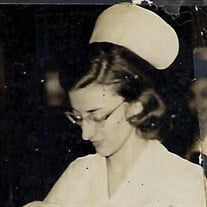 On May 5, 2021, a bright, breezy evening perfect for flying, Winifred Carpenter Goodin slipped out of her well-worn 98-year-old body and flew out the open window of her daughter’s home to join her mother and brother in the next realm. She was adamant about the open window and promised to haunt us if we allowed her to pass away in a closed room. Winifred, aka Mutts, was born to Olive Waltman Carpenter and Howard Samuel Carpenter on March 2, 1923 in a farmhouse at The Buck, southern Lancaster County, PA. She arrived in a blizzard so severe the doctor was snowed in with the family for days. She was raised by a single mother in Lancaster city after her father abandoned the family during the Great Depression when she was 5. She graduated from McCaskey High School, was valedictorian of her class at St. Joseph Hospital School of Nursing and was employed as a nurse in the hospital’s delivery room. She went on to become a supervisor for the Visiting Nurses Association, where she developed the county’s first Home Health Aide and Well Baby programs. Later she was Director of Education for Quality Care, where she helped the agency transition to Medicare. A single mom, Mutts sacrificed for her kids at a time when nurses were paid as little as $3,600 a year and child support was unenforced. While working full time, she attended Millersville University part time for more than a decade, earning her BS in Nursing in 1973. In the 1960’s, she drove a tiny used Fiat 500 that was repaired with a coffee can and unfailingly quit running when it rained. After retiring at age 70, she continued to live independently in her home of 58 years and remained razor-sharp until her death. She read several books a week, followed politics (loved Joe Biden) and the Phillies, secretly wrote poetry, enjoyed the birds and wildlife at her feeder, and continued to cook for her family until a month before her death. She could convincingly claim things were not as bad as they seemed, had a unique sense of humor and was the family medical advisor. She took particular delight in her only granddaughter and enjoyed instilling in her a love of reading and teaching her to cook, including her no-recipe chicken pot pie. She was preceded in death by a brother, Clair Howard Carpenter. Surviving are a daughter, Stephanie Shertzer Lawson, partner of Mutts’ Phillies buddy Jeffrey N. LeFevre; a son, Daniel H. Shertzer, Jr., husband of YolagnIs Shertzer; beloved granddaughter, Isabella N. Shertzer; sister-in-law, Janice L. Carpenter; nephew, Mark Carpenter (Mae) and her cat Buddy. Interment will be at the convenience of the family. Contributions can be made in her memory to the Humane League of Lancaster County, 2195 Lincoln Hwy. East, Lancaster, PA 17602.

On May 5, 2021, a bright, breezy evening perfect for flying, Winifred Carpenter Goodin slipped out of her well-worn 98-year-old body and flew out the open window of her daughter&#8217;s home to join her mother and brother in the next realm.... View Obituary & Service Information

The family of Winifred Carpenter Goodin created this Life Tributes page to make it easy to share your memories.

Send flowers to the Goodin family.