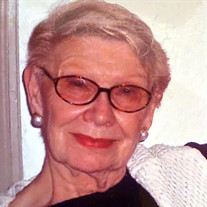 Yvonne Sheaffer Belsinger, 94, died on Sunday, February 14, 2021 at Magnolias of Lancaster. Born in Sarreguemines, France, she was the daughter to the late Marcel and Matilde (Herman) Schaller. She was the loving wife to Edwin W. Sheaffer and Jack S. Belsinger. Growing up in Sarreguemines, a town on the border of France and Germany, during World War II, Yvonne was a strong woman with survival skills and instincts that permeated her life. As a teenager, she was held in a Nazi War Camp and was forced to manufacture ammunition for the Germans. She survived, and after the war she met and fell in love with Edwin W. Sheaffer, who was serving in our military and was assisting those working in War Camps to relocate home. Yvonne and Edwin moved to Lancaster in 1945 and she immediately took English classes at McCaskey. She worked for Slaymaker Lock as well as Hubley Toy. She and Edwin welcomed their child, Brian B. Sheaffer. After losing her husband in 1962, Yvonne met Jack S. Belsinger and they lived happily until his passing in 2007. They enjoyed spending time in France and traveling around the world together. Yvonne had many hobbies including gardening, canning vegetables, playing tennis and bowling. She volunteered for 40 years with Lancaster’s Meals on Wheels and was a matriarch to her entire family living in their Marietta Avenue home. In addition to her son Brian B. Sheaffer (Paula) of Lititz. She is survived by her stepdaughter Terry Johnson of Silver Springs, MD and her grandchildren, Pamela E. Peters (Lancaster), Lisa Belsinger Anderson (Ephrata), Eric Belsinger (Philadelphia), Michele Johnson-Weider (Silver Springs, MD), Mary E. Kimmet (Lititz), Ashley Belsinger (Lancaster), and her great-grandchild, Delilah J. Miller. She was preceded in death by her stepson Andrew Belsinger, husband of Debra. She often visited her brother Roger Schaller of France. Family and friends are invited to a Graveside service, which will be held Friday, February 19, 2021 at 1:00 p.m. at Conestoga Memorial Park in Lancaster. Memorial contributions may be made in Yvonne’s name to Meals on Wheels, 1085 Manheim Pike, Lancaster, PA 17601. The family wishes to thank both Country Meadows and Magnolias of Lancaster for their loving care.

Yvonne Sheaffer Belsinger, 94, died on Sunday, February 14, 2021 at Magnolias of Lancaster. Born in Sarreguemines, France, she was the daughter to the late Marcel and Matilde (Herman) Schaller. She was the loving wife to Edwin W. Sheaffer and... View Obituary & Service Information

The family of Yvonne Sheaffer Belsinger created this Life Tributes page to make it easy to share your memories.

Send flowers to the Belsinger family.